Airlines and labour unions at odds in low-cost flight revolution 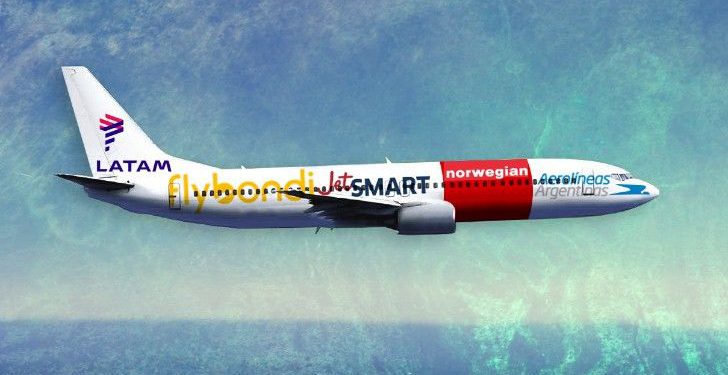 Low-cost airline options like have flooded the Argentine market as the Macri administration pushes new pro-market policies. But the dramatic shift, while lowering prices for travellers, has prompted unrest and anger among labour unions.

With a frenzy of first-time flyers and veteran travellers exploring new alternatives, 14.1 million passengers boarded domestic flights in Argentina in 2018 as the low-cost market exploded. Travellers on domestic flights have risen by more than 40 percent from 2015, when some 10 million people caught flights around the country. Cheap fares for routes to and from the provinces made the difference.

Low-cost airline options have flooded Argentine runways ever since the Mauricio Macri administration began to shake up up the country’s aviation market with pro-market policies that liberalised the sector. The government approved more than 630 new air routes for 13 companies via tender processes in 2017.

Macri’s modernisation project isn’t showing signs of a slowdown either — low-cost airline JetSMART gained government approval for 261 new domestic and international routes just last month. The Chilean firm sold over 54,000 tickets in the first 24 hours of its launch, drawing eyes to new flight options with fares from one peso per passenger in a bold promotion.

The market has become increasingly more competitive. Companies including Norwegian, Flybondi and LATAM have been ushered into this new era of Argentine aviation, offering options beyond state-owned Aerolíneas Argentinas in a market that was long locked up by strict Kirchnerite-era policies. The changes, however, have not arrived without tension.

Aerolíneas, the national airline founded in 1950, has long been criticised for poor service and cost-prohibitive flight prices. And today, even with the competition, the firm casts a long shadow over the sector, with questions being asked about its future in the new marketplace. The tensions are showing most on the labour front, with union activity at the company often causing complications.

In one of a series of union strikes by Aerolíneas workers in the fall of 2018, 11 hours of stoppage set back over 30,000 passengers on 258 flights. And, days before the G20 Leaders Summit was set to start in Argentina in late November, the Argentine Federation of Aeronautical Personnel (FAPA) called for a 24-hour halt in airline activity.

Tomás Insausti, the chief of Argentina’s National Administration of Civil Aviation (ANAC), says the low-cost market has pushed Aerolíneas Argentinas to provide better service throughout the past three years.

“Aerolíneas is operating at a professional standard that it did not have in the past,” Insausti said in an interview with the Times. “If you race alone, you only need to walk to win. If you race against other people, you’ve got to run quickly.”

As new unions form under Norwegian and FlyBondi – which got the green light for its own unionised workers association in January – the country’s six traditional airline labour unions, such as FAPA and the Association of Aeronautic Technical Personelle (ATPA), have expressed outrage. These national organisations claim the government is trying to stymie union activity in the sector to favour a cheaper, less protected labour force in the low-cost market.

Argentine airline union leaders like Ricardo Cirielli, ATPA’s general secretary, are dubious about the government’s call to expand commercial options. When airlines like JetSMART are granted new routes, “the market does not expand, and the low-cost foreign companies cannibalise our national airline companies,” Cirielli told the Times.

Foreign options have “no problem” staying competitive in the country, because “they have strong external financial support,” Cirielli explained. New low-cost airlines threaten to sink national airlines that can’t keep up with low prices, he argued. “The existing traditional companies, such as Aerolíneas Argentinas and Austral, cannot quickly adapt their operating structures to lower costs, nor do they have so much financial support to face wild competition.”

Data from the Argentine Air Navigation Company (EANA) indicates there has been a substantial reduction in Aerolíneas Argentinas’ market share over the past year. The state-owned firm had a hold on 73 percent of the market in January, 2018 and its numbers fell to 68 percent in December, 2018. That dropped further to about 60 percent as of January, 2019, ANAC reported.

Nevertheless, the national company has seen an increase in total passengers. “The smaller percentage mark just means that the market is larger, that the pie is bigger,” Insausti said. “Aerolíneas is growing and losing less money.”

Commercial leaders say that their low-cost options are serving the country’s best interest. Norwegian Argentina CEO Ole Christian Melhus told the Times that his airline is creating new jobs for Argentine crews and opening up options for travellers.

“We believe that competition is good, the general winner is usually the passenger as they can get lower fares,” Melhus said.

JetSMART CEO Estuardo Ortiz said his company’s launch in Argentina will help to expand the air travel market by opening up accessible flight fares to first-time travellers across socio-economic classes.

“It’s an extensive continent, and a great majority of its people are in the middle class. High prices have been prohibitive to travel for decades,” Ortiz said at a press conference last month.

Argentina’s air-travel revolution mimics similar chances that hit the US market decades ago, and a similar shake-up took place in neighboring Brazil more than a decade ago, ANAC’s Insausti explained. “Brazil did it 15 years ago and they went from 38 million passengers to around 120 million passengers,” he explained.

Most union leaders, however, aren’t buying into the government’s bid to remake the market. Cirielli said that the Macri administration is imposing “new rules of the game” with “a model that ensures Argentine businesses and markets are dominated by foreign companies.”

In an interview, Marcelo Canton, the director of communications at Aerolíneas Argentinas, said he was optimistic about the airline’s place in the country. “Our position is a very strong one,” he told the Times. “We have confidence that we’re going to sustain it and [that we’re] going to grow much more.”

He pointed out that Aerolíneas remained in first place in Argentina with regards to the number of airplanes, quantity of flights and quantity of passengers, adding that he doesn’t see that changing anytime soon.

As for the unions, he said Aerolíneas will “meet the needs of the workers of Aerolíneas Argentinas while seeing that the airline is running efficiently.”

Further competition lies ahead. The number of companies servicing Argentina will likely grow in coming years, ANAC’s Insausti signalled. “There are a couple of other companies inquiring… I don’t want to guess about how many more,” he said. “I see an Argentina with more companies, that will forever now have more connections between the provinces… and more democracy when it comes to pricing.”

Union leaders, however, say the changes could be sacrificing safety in favour of profitability.

For its part, Norwegian has had no problem adhering to the “very clear” government regulations, emphasising that it has made training and hiring Argentine pilots a priority, Melhus said.

“What have we created here in Argentina? We’ve created a lot of jobs. And the unions should appreciate that,” he said.